The Vancouver 2010 Olympic Games brought more than just athletes to B.C. It also left the province with a bad case of the measles.

In research outlined today in The Journal of Infectious Diseases, scientists at the University of British Columbia and the B.C. Centre for Disease Control used genetic sequencing to trace the 2010 measles outbreak, linking it back to an influx of visitors during the Winter Olympics. 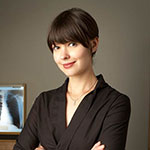 “In 2010, we had two visitors, probably from separate parts of the world, who each brought one genotype of measles with them,” said lead author Jennifer Gardy, assistant professor with the UBC School of Population and Public Health and a senior scientist with the B.C. Centre for Disease Control. “With DNA sequencing, we were able to track how those genotypes spread around the province – something we couldn’t easily do before.”

In the largest measles genomics project to date, the scientists performed DNA sequencing for 27 different measles viruses. They discovered that two different strains of the virus, D8 and H1, were brought into the Vancouver area during the Olympics, sparking the first cases of measles in the province since 2007. In total, 82 cases of measles were recorded in March and April of 2010. The D8 strain remained confined to Vancouver while the H1 strain spread across the province.

“The genomic data revealed that all the measles cases in northern B.C. arose from a single introduction, likely along Highway 97,” noted Gardy.

Gardy’s team used whole-genome sequencing to track the outbreak, an approach they pioneered four years ago when analyzing TB outbreaks.

The province has continued to experience regular measles outbreaks since 2010, but the strains introduced during the Olympics have gone away. In 2014, there were more than 400 cases reported in the Fraser Valley.

“If we have access to more genomic DNA from samples in the future, we might be able to build better maps of how measles outbreaks start and spread,” said Gardy. “Thankfully, we already know how to stop them, which is to get immunized.”

This research was funded by Genome BC through the Emerging Issues Fund.