New weapon in the fight against malnutrition

UBC scientists have opened the doors to new research into malnutrition by creating an animal model that replicates the imbalance of gut bacteria associated with the difficult-to-treat disease.

Malnutrition affects millions of people worldwide and is responsible for one-fifth of deaths in children under the age of five. Children can also experience impaired cognitive development and stunted growth. 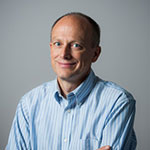 The problem arises when people don’t have enough food to eat and their diet lacks proper nutrients. The disease also has a lot to do with environmental factors and it has been a challenge to develop treatments to reverse malnutrition.

“Everyone thought that you simply needed to feed people and they’d be fine, but it didn’t work,” said Brett Finlay, a professor of microbiology and biochemistry at UBC. “The gut bacteria model allows us to figure out what’s going on and to think about ways to fix it.”

According to Finlay and UBC PhD student Eric Brown, malnutrition can be difficult to treat because it affects the good bacteria that live in the gut. People suffering from malnutrition often show signs of a disease known as environmental enteropathy, which is an inflammatory disorder of the small intestine and is likely caused by ingesting pathogenic fecal bacteria early in life from a contaminated environment. This shifts the balance of the original healthy bacteria in the gut and leads to poor absorption of nutrients.

The study, published today in Nature Communications, explains how the research team developed a mouse model to reproduce the symptoms of environmental enteropathy and malnourishment.

“We were able to see how a malnourished diet has a strong, measurable impact on the microbes in the small intestine,” said Brown. “This new model gives us the opportunity to examine the impact of malnutrition on gut microbiology and assess the role of infections.”

Pathogenic bacterial infections like salmonella and E. coli are huge problems in developing countries because they are much more harmful to people suffering from malnutrition, leading to chronic diarrhea and inflammation.

With an animal model, Finlay said researchers will be better able to test treatments and understand how malnutrition impacts a child’s development.